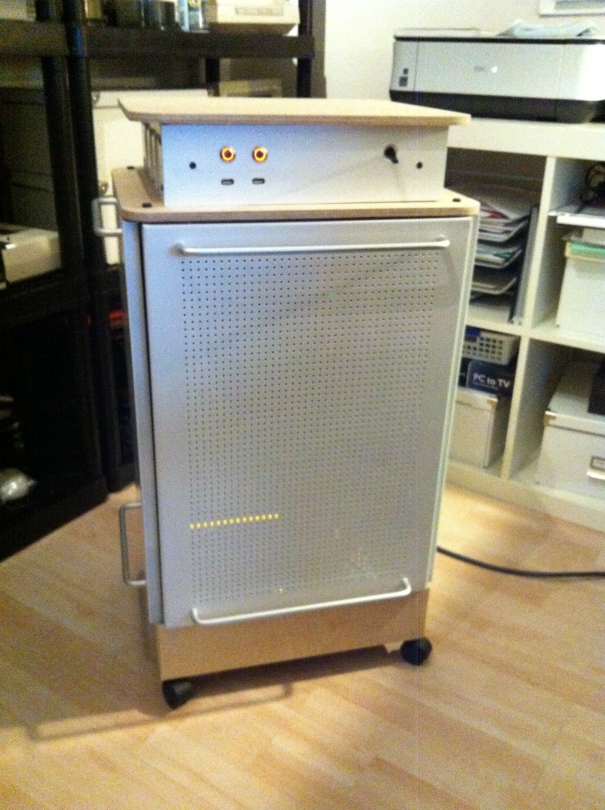 This is my attempt at creating a multi-computer video converting computer. Basically I decided to build a custom computer case that can hold 3 or 4 computers. All these computers would do is transcode video. I have a huge collection of video and now that I have an Apple TV, I’ve decided to convert my media into an iTunes favorable format. I didn’t want to have my main computer spending all day and night transcoding, and as I had several extra older computers in the house I decided that I would use those older computers to do all the work.

I decided against having a pile of crappy old looking beige computers sitting in my house chugging on video. I thought I would have some fun with this project. I was planning to remote into these computers so I wouldn’t need monitors or keyboards, or mice for that matter. I also didn’t want network cables running all over either. So my plan was to put the two fastest old computers into a custom case that I would build using Ikea parts!

Why you may ask? Because I can, I reply. I’ve had some of these Ikea parts laying around for a while, planning to use them some day on a project like this. Now was the time to finally build my mini-super computer.

At this point, I have two computers in there, but have plans to add one more at some point. I have Windows XP running on both, and both machines have a wireless N USB dongle. I have a crossover network cable running from one machine to the other. I did this so that I can attach a 500 GB drive to one machine and have the other share access to it. This avoids files having to be send wirelessly through the wifi network.

It is still a work in progress, as far as my end goal. But it does work, and I have been using it to convert video. I’ll update this page when I get another computer in there. Until then, check out the photo’s.