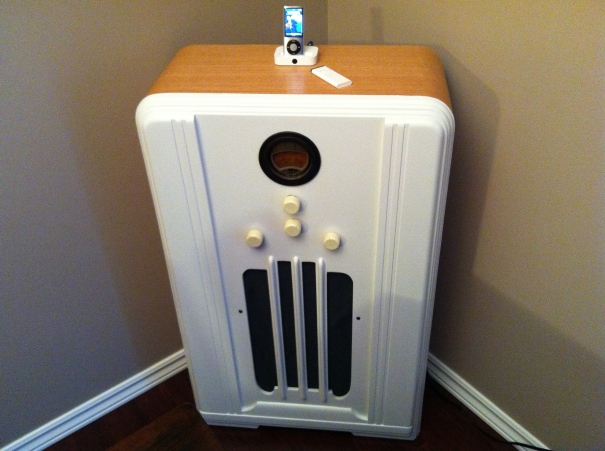 I want to share with you a project that I started working on a while ago now. After I completed my arcade machines I found that I really enjoyed using it as a jukebox. The software was very easy to use and really gave a nice jukebox experience. It occurred to me that It would not be much more difficult to build an actual jukebox than it was to build an arcade machine.

While researching jukeboxes and old radio cabinets, I found that I was really drawn to the older, classic looking designs. The older cabinets from the 30’s and 40’s had so much style and design built into them.

The idea is to have my jukebox look just like one of these old jukeboxes, but inside I would of course have a computer and about 20 thousand available songs!

I thought that I could probably find an antique jukebox or radio cabinet for this project. However I did not want to destroy a classic antique, so I began to look for an old cabinet that was beyond restoration.

I managed to find an old radio cabinet that might work perfectly for this project. It is a Philco model 37-610. This radio cabinet was built in 1937! This was a 5 tube radio that did not work at all. It was missing some knobs and the tubes were dead. I managed to buy it from a collector who let me have it for $20!

I was going to try and restore the cabinet itself as best I could. This would take quite a bit of work as even the laminate was pealing off in a few places. I was planning to modify the look of it as well. At first I felt like I should not do anything too drastic to change it’s appearance. It’s kind of scary to start hacking away at a 75 year old piece of history. But I soon realized that I bought it in such rough shape on purpose, so I shouldn’t feel too bad about changing it.

I needed to figure out how this radio would work as a jukebox. It would have been easy enough to pop a computer and sound system inside the cabinet – there was a ton of room in there, once I took the tube radio out. I also had trouble trying to add a user interface. I thought about adding an touch screen monitor that could rise up from the top. I decided against that in the end.

Then it occurred to me that I could just use it as an iPod dock. I would only have to add in a sound system. This idea appealed to me because it would be easy, cheap, and wouldn’t involve hacking this cabinet up too much.

In the end I added new vainer to the sides and top. The old stuff was peeling and I really didn’t have the expertise to repair it. I’m sure there are real craftsmen out there who could have spent 100’s of hours restoring this old cabinet, but that’s not what I wanted. I wanted this thing to look ‘cool’. Something I would be proud to have in my home. I will say that it was an EXTREMELY difficult decision to paint over the detailed wood on this project. I had not purchased this cabinet with the intent to restore it. My plan was to find something to build a jukebox out of. This particular cabinet really didn’t fit my needs for building a jukebox. For $20, it was too good a deal to not purchase. In the end, I feel good about how things turned out.

Watch a video of my radio in action here.

Check out some of the progress photo’s here.